For the last 8 weeks I've been in a 2nd class at Apparel Arts called Design Principles and Fashion History. Taught by Suzy Furrer, the founder of the school, we went through many exercises to identify what shapes and colors we are drawn to as designers. We identified our target market, wrote a mission statement and designed a logo. The final project was to design an 8 piece collection.

I wanted to explore making clothes for gender non-conforming folks. I wanted it to be inclusive, with space for people who would be coming to it from different angles.

A friend suggested that I post it. Here is it, Muse first, the collection, then all the supporting info. 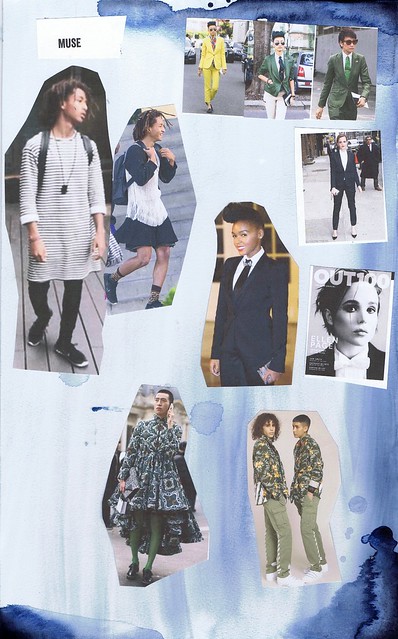 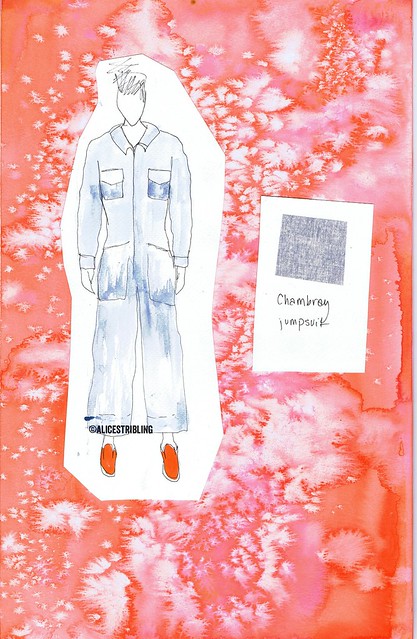 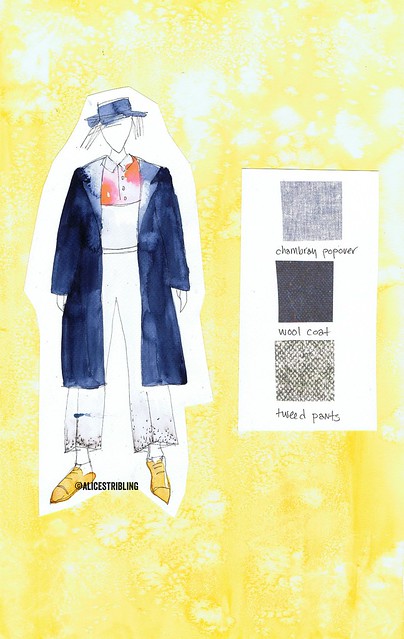 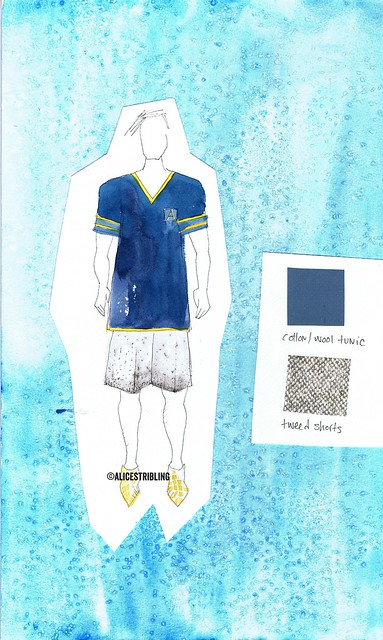 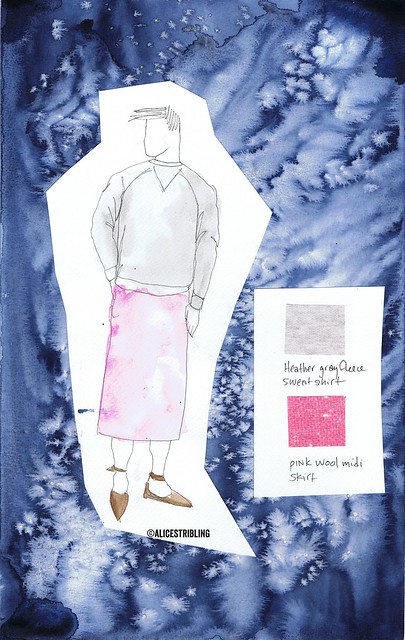 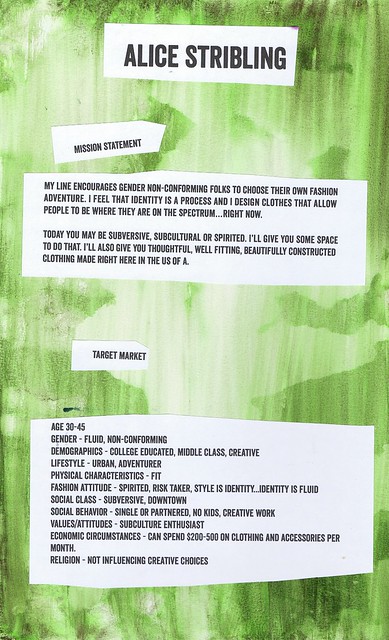 Posted by Unknown at 7:04 AM No comments:

Day 4 (Wednesday) we arrived in Truckee around 5:30 and landed at the first bike shop on the route. Zeke went in to talk to the mechanic and I went next door to get some drinks and pickles.

I came back and the mechanic had Zeke’s bike taken apart and was explaining to me what exactly had been causing the squeaking noise that Zeke thought “wasn’t a big deal”. Turns out it was a very big deal. The steerer tube had a line worn about halfway through it, caused by an incorrectly installed lower bearing.

The mechanic said he would need to research a new fork, and wouldn’t be able to do it until the next day (Thursday). The part wouldn’t arrive until Friday earliest.

The tricky part was that we were supposed to be meeting Zeke’s next riding buddy near Quincy, I can’t remember the name of the campground, on Thursday.

Zeke was really bummed out about the delay.

We checked into the historic Truckee Hotel and made some phone calls to figure out logistics. Truckee wasn’t a bad place to stay, there are plenty of restaurants and hiking paths nearby.

We got a good nights sleep, had breakfast the next day and popped by the bike shop a couple of times. The mechanics were researching a replacement fork, but they weren’t having a lot of luck finding a good one for touring. I appreciate the work they did, but I wish the shop had communicated with us a little more about their interest and/or limitations in helping us. They are a mostly mountain bike shop, with mostly rentals, and in the end I really felt like we were bothering them. Who knows maybe they were short handed, or not invested. It was a little uncomfortable. I brought them pizza and beer to say thanks. Anyway, I feel lucky that we have the LBS that we do in SF, let’s just leave it at that.

In the end, Zeke’s Aba (dad) ended up finding a Surly Karate Monkey fork and he had it shipped to arrive Friday morning. I took a bus at noon on Friday to Sac and missed meeting Bill and Jaye (the next riding buddies). Also missed Zeke’s excitement at getting his bike fixed at noon. I’m sure they continued on as far as possible so that Zeke could have continuity on his ride. They were scheduled to hang out at Lassen Volcanic Park a couple of days as well.

I took Amtrak Capital Corridor from Sac to Richmond, it was super easy to roll the bike on board the train. I really loved it. I feel like I'm still processing everything that happened. Trying to get back into meditating and having some loving kindness towards myself. Also, this week has been full of Apparel Arts (starting on necklines), Dr Sketchy’s (drew Roma Mafia), etc.

Major Takeaways from this Tour:

• Packing light is still the way to go. Two front bags + tent/sleeping pad strapped to the back rack is such a rocking setup.
• Per Jesse Mullan, "The Sierras have had millions of years to work on their game, and this was your first try"
• Altitude and heat are no joke
• Now I understand why riders go and train in the mountains, they make you stronger
• It doesn’t have to be fun to be fun AKA adventure is never fun while you are having it
• I’ll be processing this for a long time, I think I’m different.


That line is not supposed to be there. Grateful that Zeke did not have an accident.

The historic Truckee hotel, since 1890s. Feels like Deadwood.

Taught Zeke about side eye.

Collected a Tuolmne meadows pin, a Lake Tahoe pin and still have Eeyor in a Winnie the Pooh suit.
Posted by Unknown at 7:00 PM No comments:

Markleeville was great, I had a delicious breakfast burrito with extra crispy bacon, plenty of coffee and wifi to catch up with the internoodle (TM Miss Sheldra).

Several Death Riders came by to chat us up while we sat outside on the veranda. The sun also came to visit. And I got cranky. That’s one of the things that I knew about myself, but really experienced on this trip. I HATE the heat. I know the trick of pouring water over my head, we did that in the South of France while drawrrring in the heat. I know the trick of a soaked hankie tied around my neck. I soaked myself over and over on this tour. But this is one of the reasons that I don’t want to live where I grew up (the South). I melt. Like a bad ass chocolate chip cookie, I MELT.

So I was getting hot waiting on the check, then my spirits started going south. We hit up the grocery and decided to head up 89 to Woodfords, then see how we were doing. Of course Zeke wanted to do Luther Pass, it was pretty much all he could talk about. So there we were again. Negotiating.

It was slow going on 89 for me. It was hot. I needed some shade. A rider came up and told us in our shady spot that we were almost at the last little summit before Woodfords, so we continued on. There is a store in Woodfords. There we ate two grilled cheese, 4 pickles, a V8 and filled our bottles.

I guess in my mind Luther Pass was somewhere waaaay past Woodfords. I found out soon enough that Woodfords is the base of the pass. We took a couple of shady stops on the way to Hope Vally RV resort, and stopped for the night. GREAT DECISION.

Hope Valley was a gem. We stopped first at the little store/restaurant/pie shop. This is where we met Leesa, who filled us full of lemonade, cookies, pie a la mode and oh yeah I got a beer for the campsite. Then we met Eric, who gave us the best site in the space.

What a gorgeous place! We had beautiful golden light, and the breeze was making the tree leaves flicker all over the place. Huge white rocks, a swimming hole, with rock walls surrounding. The place has great facilities as well. There’s even a fantastic restaurant 500ft down the road where we had a really nice dinner. We ate well that day, met some wonderful people and it was relaxing.

We set off early on Day 4. Zeke wanted to make it all the way to Truckee. He assured me that after Luther Pass, it was just bumps in the road, no serious elevations. Luther Pass was pretty, though we were on HWY 88/89 with a lot of fast moving traffic for a while. I don’t like that. It’s unnerving and stressful.

I should mention that if we had gone as far as Zeke wanted to go the night before, we would have pushed on to Tahoe, to stay in Emerald Bay.

Instead at the end of Luther Pass (89/89), we had second breakfast. Zeke chose well, he ordered huevos rancheros and there were cripsy chips and avocado and all sorts of goodness on the plate. I believe we were at the Meyers Downtown Cafe. The server was from Tennessee, he loved being outdoors, his sons were both world class skiers. He took very good care of us.

Day 4 was the day of bike paths. We had a path to Tahoe, then on and off paths from Tahoe to Truckee.

Zeke was right in that the elevation was mostly just sort of bumpish. Though again we hit the bumps at the hottest part of the day, up and over Emerald Bay, to Meeks Bay, then along to my favorite part the Truckee river bike path. We saw people rafting down the river all afternoon and it looked glorious. Oh almost forgot the best part of the day, popping my feet into Lake Tahoe!!

It was about a 70 mile day to Truckee. The last 10 miles or so we had a nice wide shoulder on 89, so we cranked it. The next part of the story involves a mechanical. All I can say is that I’m grateful that the mechanical did not cause a major accident.


Between Markleeville and Woodfords.

The maker of the pies, Leesa!

Hot feet in cold Tahoe.
Posted by Unknown at 7:00 PM No comments: